Our main worship service is held on Sunday morning, 10.30-11.30, followed by tea and coffee in the hall.  Our Junior Church joins us for the first part of the service, before going out to do group work in other rooms around the building.  A play corner is provided for toddlers.  We have a second service 18.30-19.30 on Sunday evening.  All our services are open for anyone to join, and stewards are on hand to welcome visitors.

We share in a Communion meal as part of our service on the second Sunday in each month, in the morning on odd-numbered months, and the evening on even-numbered months (except August, which is a morning Communion).

The third Sunday morning each month is usually an all-age service, and sometimes there is also a baptism.

We were delighted to receive the Child-Friendly Church Award on 15 October 2011. 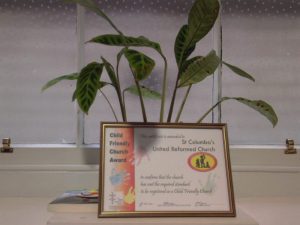 In our singing, we use the United Reformed Church’s hymnbook, Rejoice and Sing.  We also hold copyright licences which enable us to reproduce a wider range of songs from around the world, and both modern and traditional, including occasionally some written by our own members.  Our singing is accompanied on organ, keyboard, or occasionally other instruments.  (For those interested in the detail, our three-manual pipe organ was installed by Foster & Andrews of Hull in 1884.  A new detached oak drawstop console was added by Prested of Durham a century later.  It was replaced by a three-manual digital Chapel CF30 organ from Allen Organs, finished in walnut in 2015.)

Copies of the New International Version of the Bible (a late twentieth century translation from the original languages into modern English, by the International Bible Society) are available for worshippers to follow readings, although other versions are also used, particularly the New Revised Standard Version.

In addition to hymns and Bible readings, our services also include prayers, a sermon, a collection towards the costs of the church’s work, and notices given by one of the stewards.