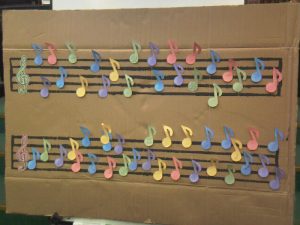 Our morning service on 7 August, led by Local Preacher Angela Storer, had a musical theme.

We sang a variety of hymns and songs (7 in all), including a three-part round, a Welsh hymn and a Wesley favourite.  It was also a very participative service, with a trio singing and signing another song.

During the service, worshippers brought forward colourful quavers to stick onto a large stave, to represent our prayers for others.

Angela encouraged each of us to sing the song that God had given us, bringing together melody, harmony and rhythm.

Churches Together in North Shields were faced with a rare wet Good Friday this year, but did not let the weather beat us.

A huge crowd of worshippers packed into St Columba’s Church for the service that would have been held in the open air of Northumberland Square.  The highlight was the presentation of a Passion drama Voices from the Crowd.  This was followed by a walk of witness around the town centre, with umbrellas and banners, led by the band of the Salvation Army.  We paused in Bedford Street for a reading and a hymn, before returning to the square, after which many continued to church services or Messy Church.

About 25 people attended the 4th worship leaders’ training day, organised by the Coast Mission Partnership, but open to all churches in the Northern Synod.

Retired broadcaster Revd Peter Moth led the day on the theme of communications, with jocular reference to Matthew 13 “You will hear and hear, but never understand; you will look and look, but never see.”  There was a mixture of practical advice, examples, and a chance to try for ourselves.

We learned to be aware of the building’s acoustics, and to speak slowly and loudly enough to be heard.  Microphones should be positioned so we can keep our heads up and see the congregation.  Breathing was encouraged!

Writing for speaking is different from writing for reading, and we should try to make our use of language clear, direct and natural, avoiding ‘kneejerk liturgy’.

We agreed that it was important to have some form of spoken address in church services, although not necessarily a traditional sermon.  Explanation of Bible readings was increasingly valuable.

We remembered that communications can also be nonverbal…

and there is even a place for silence.

It was a successful and worthwhile day, with the usual ample lunch provided.

“Leading public prayers is a privilege and an opportunity.”  This was the realisation voiced by one of the participants at third in a series of 4 training days for worship leaders and worship teams, organised by the Coast Mission Partnership.

Nearly 20 people from across the Synod attended the session held at North Shields Baptist Church, led by Revd Dr Jan Berry of Northern College.  We learned about different forms of prayer, such as invocation, adoration, confession, thanksgiving, petition, intercession, offering, benediction and sending out, and when to use them in the context of a worship pattern of gathering, hearing and responding.  Jan described different styles of prayer, such as structured, extempore, sung, responsive, bidding, silent, visual, musical and symbolic.  We also shared experienced of what worked and what didn’t from the congregation’s point of view.

Good resources for prayer include:

In the afternoon, Jan explained how to write prayers – by meditating on a theme, drawing on imagination to brainstorm words with both positive and negative associations, focussing on the angle to take, drafting out the prayer as it flows, then revising after a break.  Prayers may have a definite structure and vivid imagery, and should be clearly spoken and not too long, but should avoid jargon, long phrases, clichés, and language that unnecessarily alienates or distracts the congregation.

Finally, we spent some time writing our own prayers, which were shared at the end.  There were good points in each of them, with some expressing themselves particularly poignantly.

We all agreed that it had been a useful day, giving us greater knowledge, confidence and inspiration in leading prayers in our own churches. 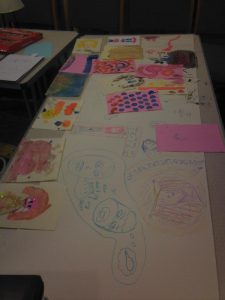