After last year’s heavy rain, we were blessed this Good Friday with glorious warm sunshine!

Our ecumenical open air service was a little different this year.

Members from four of our churches gave reflections on the stations of the cross, as we journeyed around the town centre, starting with worship in Northumberland Square, then stopping in three places in Bedford Street, before returning to the square for the final hymn.  We also had some chants.  There was a good turn out for the procession, led by a huge wooden cross and the band of the Salvation Army.  We were also joined by Alan Campbell MP and Mayor Norma Redfearn, who brought greetings to the community.

As each station was reached, the words were nailed to the cross, bringing the reflections to life:

As we walked along, we also gave out Easter cards, inviting spectators to come to church this Easter.

Churches Together in North Shields were faced with a rare wet Good Friday this year, but did not let the weather beat us.

A huge crowd of worshippers packed into St Columba’s Church for the service that would have been held in the open air of Northumberland Square.  The highlight was the presentation of a Passion drama Voices from the Crowd.  This was followed by a walk of witness around the town centre, with umbrellas and banners, led by the band of the Salvation Army.  We paused in Bedford Street for a reading and a hymn, before returning to the square, after which many continued to church services or Messy Church.

The highlight of the open air service on Good Friday was a dramatic presentation on the theme of “What is Truth?”  This also reflected the theme of North Tyneside’s contribution to the BBC’s Great North Passion event at South Shields later that morning.

The drama involved movement and speech both by individuals and groups of people, punctuated by sharp taps of wood on wood.

Revd Liz Edwards led the service in Northumberland Square, which was also addressed by Tynemouth MP Alan Campbell, who noted the good work done in the town feeding the hungry and caring for strangers.  Singing was led by the Salvation Army, who also led the walk of witness round the town centre, with a stop for a Bible reading halfway down Bedford Street.

Thereafter there were services in various churches.  St Columba’s had Messy Church, which included a puppet show.  The hall was filled with the noise of happy chatter as children and others engaged in a variety of seasonal craft activities, including making mini Easter gardens, painting with fingertips, decorating Easter cup cakes, making Easter nests, colouring in ‘stained glass windows’, scratching out brightly coloured patterns on to crosses, decorating felt purses to hold a chocolate silver coin, sticking scenes from the life of Jesus onto crosses, decorating cross keyrings, sculpting with playdough, decorating pots and planting poppies.

During Holy Week, St Columba’s was also open for an hour in the mornings for prayer stations.  Nine small displays around the church invited visitors to sit, read part of the Easter story from the Bible, hold a tangible object linked to that episode, reflect, and pray.  The nine objects were coins, a rooster (although in that case the tangible element was string rather than a farmyard bird), a purple robe, thorns, wood, nails, a sponge, stone, and a white cloth.  For those who were able to spend the time, they made for thought-provoking reflections. 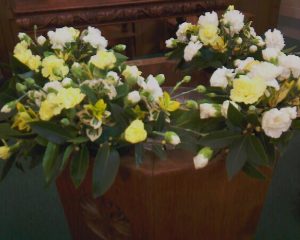 St Columba’s Church celebrated a baptism as part of the Easter weekend this year, echoing the traditions of the early centuries of the Christian church.

The weekend began with evening communion on Maundy Thursday round a table in an upper room, the Lishman Hall.  This commemorated Jesus’ last supper, as told in all four Gospels.  (Maundy Thursday gets its name from the Latin word mandatum or commandment, in Jesus’ final teaching at the last supper in John 13:34-35, “And now I am giving you a new commandment: love one another.  As I have loved you, so you must love one another.  If you have love for one another, then everyone will know that you are my disciples.” – Good News Bible, Today’s English Version © 1966, 1971, 1976 American Bible Society.)

Then on Good Friday morning, Churches Together in North Shields held the traditional open air service in Northumberland Square, led by Baptist Minister Revd Liz Edwards.  Civic greetings were given by Cllr Shirley Mortimer and Alan Campbell MP.  The Salvation Army band led a procession round the town centre, pausing for a hymn in Bedford Street.  Services were then held in the Baptist and Methodist churches as well as Holy Saviour’s, Tynemouth, whilst St Columba’s hosted a session of messy church, where children learnt about the Easter story through art and craft.  Some of their paintings, including a tree of hands and an Easter garden, were displayed in the church over the weekend.

Easter began with an early communion service, followed by a fair trade breakfast in the hall, and then all-age worship, which included infant baptism and an Easter egg hunt.  In an interactive talk, Revd Liz Blair explained that, unlike fictional character Victor Meldrew, the disciples did believe it when they met the risen Jesus on the first Easter morning.  A wooden cross was decorated with spring daffodils as we were invited to remember people and situations that needed our prayers.  After the service, worshippers gathered again in the hall for refreshments, as the baptismal celebrations continued.

Easter day ended with evening reflections from Revd Peter Heckels on what must have gone through the minds of the first disciples during the Easter weekend, at first mourning the loss of their leader, and feeling guilty for abandoning him when the authorities seized him, and fearing for their own lives, then the doubt and uncertainty with the news of resurrection, before meeting their risen lord in person, and receiving forgiveness and commissioning to spread the word to the world. 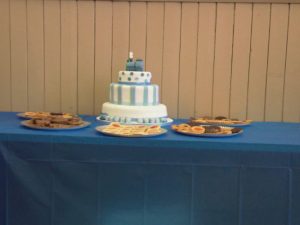 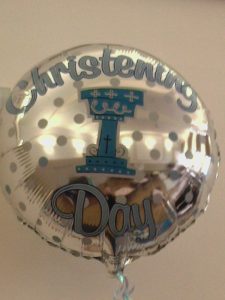 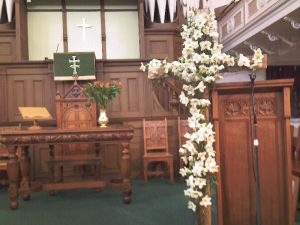 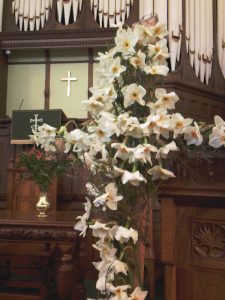 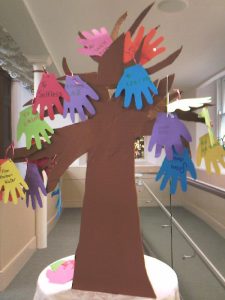 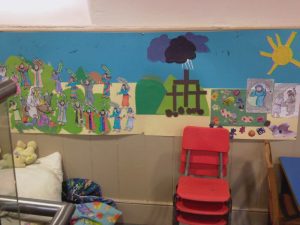 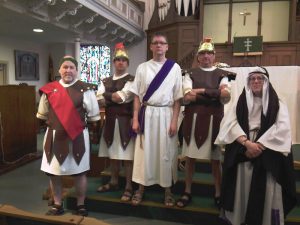 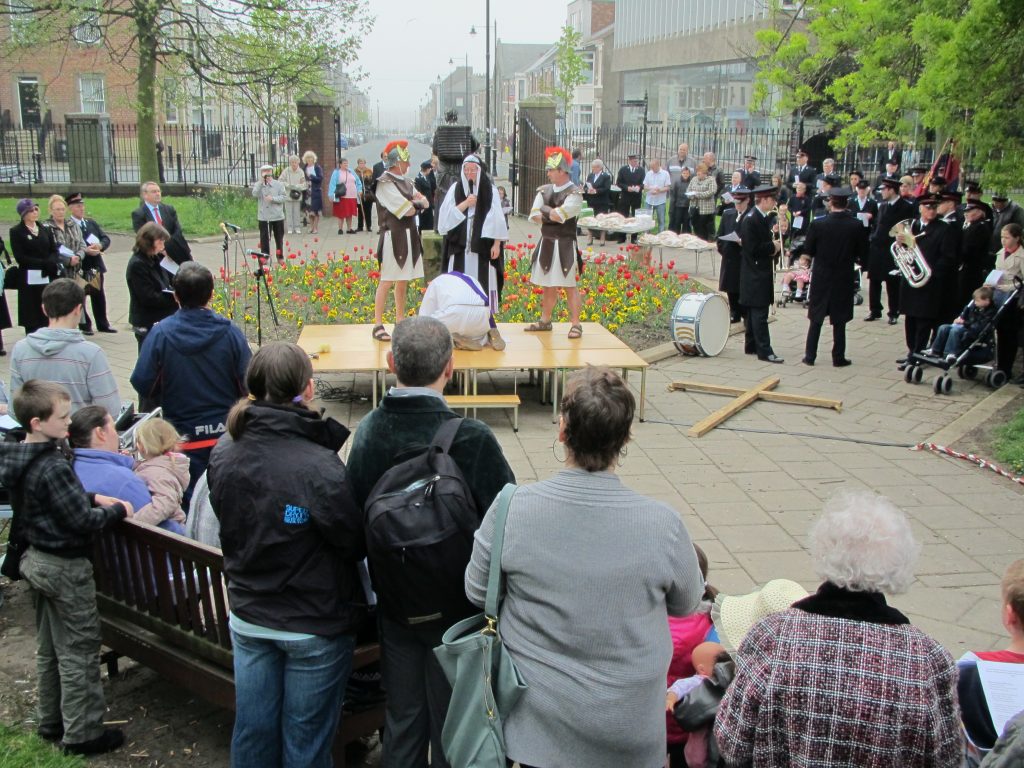 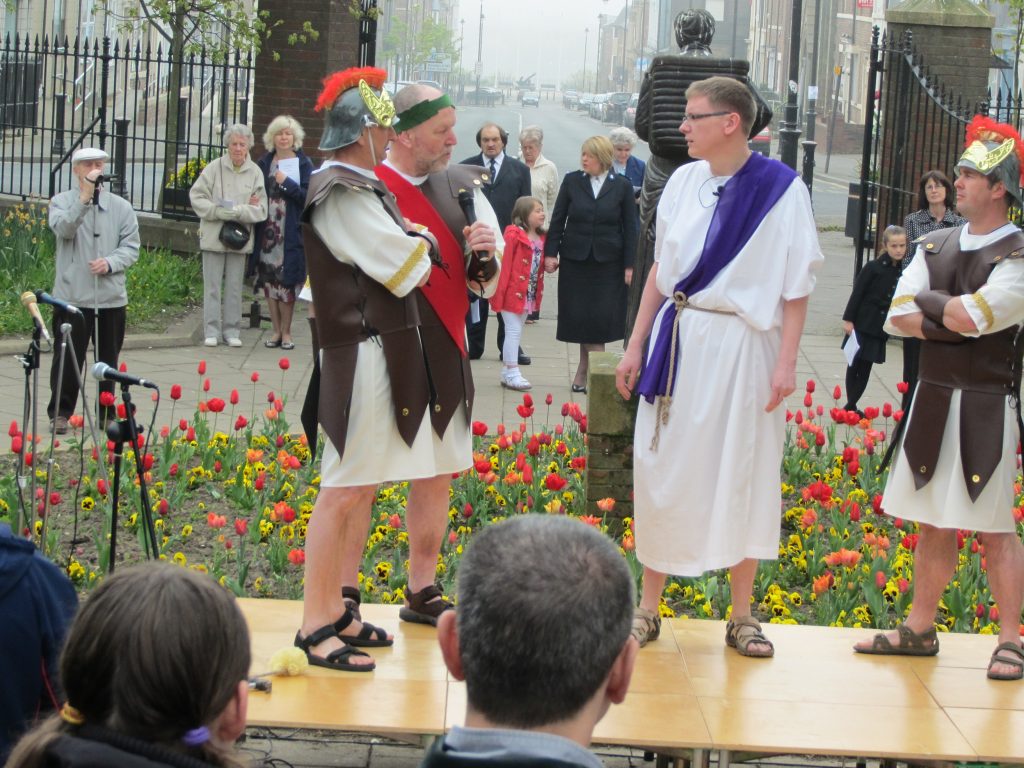 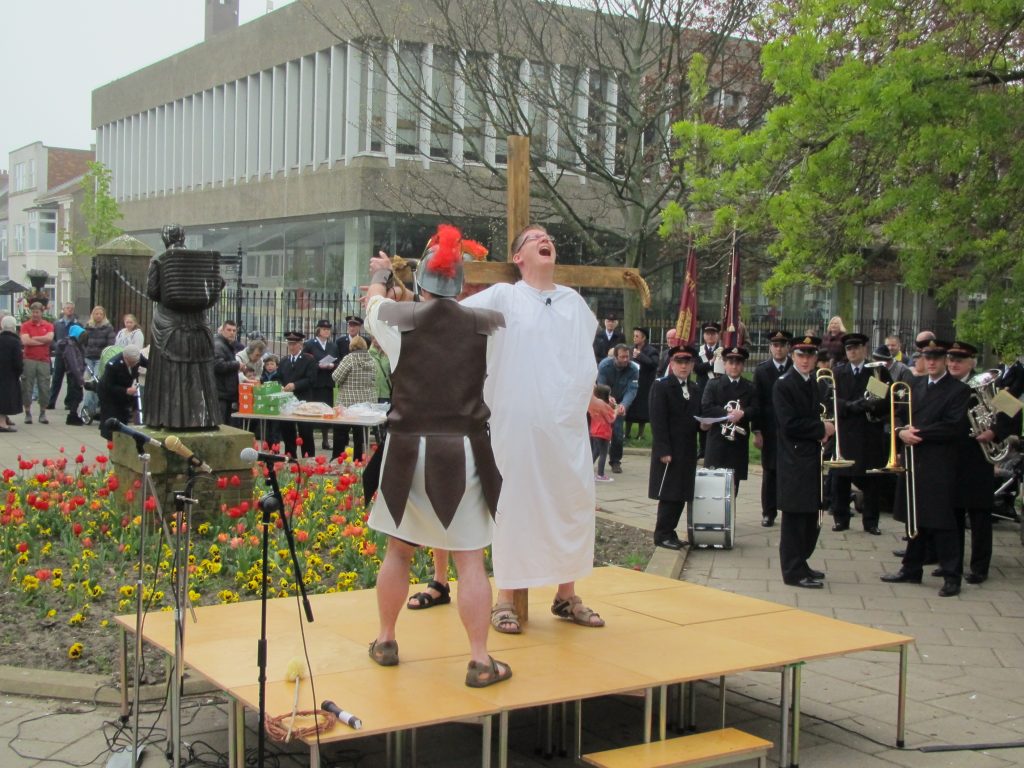 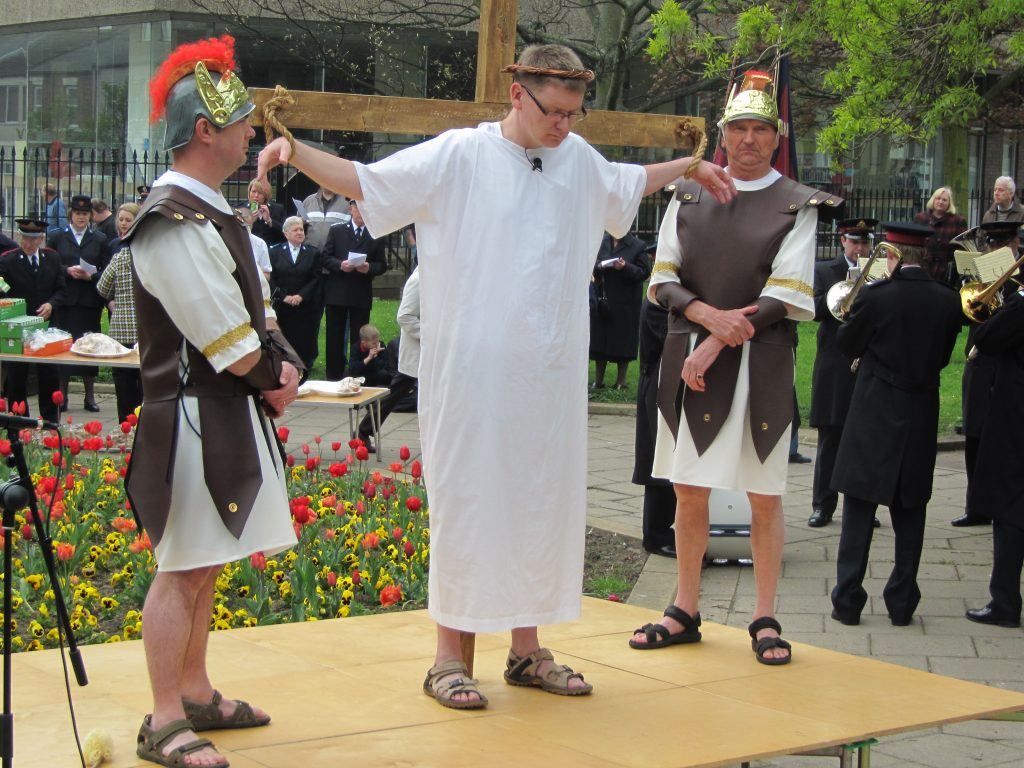