On Sunday 6 September, St Columba’s celebrated 10 years of Revd Liz Blair’s ministry.  The morning service was briefly interrupted by our Church Secretary, Shirley, who marked the occasion with a short speech and the presentation of flowers.  Afterwards, a beautifully iced cake was cut, and a card was given, signed by the whole congregation.

The whole event was a lovely surprise for Liz, who suspected nothing.  She reflected on the ups and downs of the last decade and on her first visit to the church when preaching with a view, when she felt a strong calling to St Columba’s.  Throughout it all, God had guided, taught and supported her, and we had grown spiritually as church.  Liz also paid thanks to her husband, Dave, for his prayers and support. 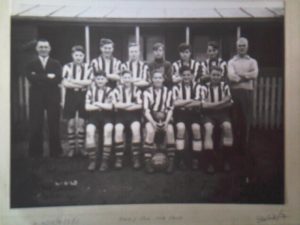 St Columba’s Church celebrated its 350th anniversary with a historical exhibition on 25-26 August.

The exhibits which attracted the most interest were some photographs from the 1940s of the cup-winning Northumberland Square Presbyterian Church AFC.  We were grateful to Tyne & Wear Archives Service for their help in making these items available for display.

The church traces its roots to North Shields Presbyterian Church, which began in 1662.  After the restoration of the monarchy, laws were passed to try to reunited the country and enforce uniformity on the Church of England.  Two thousands clergymen who felt unable to conform left the established church, and many began to lead their own congregations of Presbyterians, Independents and Baptists.  Despite persecution and arrest in the early years on Nonconformity, many of these churches survived.

In the twentieth century, the church in North Shields united with other Presbyterian and Congregational churches in the town, becoming United Reformed in 1972.

You can read more on our website about our church history.

There was also a quiz with a historical theme during the all-age part of the morning service on Sunday 26 August.  The evening services in August have been held jointly within Churches Together in North Shields, and as at happened on this weekend, we met in St Augustin’s Church of England, showing that Anglicans and Nonconformists nowadays are able to worship together on good terms.