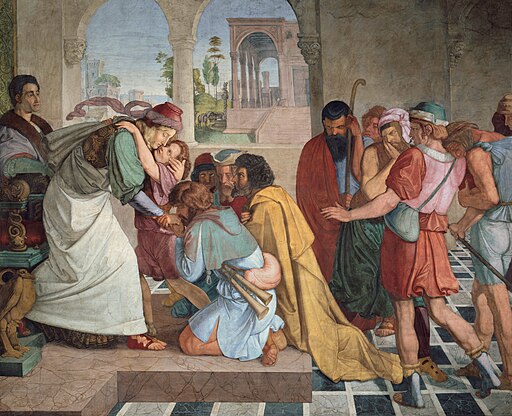 So, it’s great to be back together again.

Or maybe it’s not quite that simple.

Joseph, was daddy’s favourite; none of the other brothers were given a special coat. Then he rubbed it in, telling them all about his dreams where they had to bow down to him. So they beat him up, bound him up, and sold him off into slavery.

Not only was he enslaved, but he was sexually harassed, arrested on a trumped-up charge, and consigned to prison with no release date. Joseph’s ability to interpret dreams, however, got him in the Pharaoh’s good books. This, with his administrative abilities, brought him money, clothes, palaces, a wife, and political power.

Joseph’s brothers came to Egypt looking for food in time of famine and ended up bowing down before him as he had once dreamed. When he told his brothers, ‘I am Joseph’ (45:3), maybe there was joy.

Yet, Genesis says, ‘his brothers could not answer him, so dismayed were they at his presence.’ (45:3)

If you subjected someone to a series of appalling life experiences, then found that they had you in their power, you would be equally dismayed. It’s how Joseph sees things that makes the difference here: ‘do not be distressed or angry with yourselves because you sold me here; for God sent me before you to preserve life … to preserve for you a remnant on earth … so it was not you who sent me here, but God.’ (45:5, 7, 8)

Coronavirus cases have comfortably passed the twenty million mark worldwide, resulting in about 750 000 deaths. In the UK, over 300 000 people have been infected and over 40 000 have died. Add on economic dislocation, job losses, shielding and social isolation, shortages in the shops, holiday cancellations and quarantining; not being able to get to church on Sundays is one small part of a big, bad story that has affected us all. Where is God in the midst of all that?

Is Joseph correct? Is God taking a terrible situation and bringing good out of it? That’s easier to say if you end up as Pharaoh’s right-hand man; less so if you are an individual or a group – like a church – tentatively emerging from the social wreckage of the last few months. Yet, some positives have emerged from our current situation. This does not mean that recent suffering and struggles are unreal or unimportant, but some positives are worthy of note, celebration, and thanksgiving.

We’ve had glimpses a better society and a better environment. A lot of neighbours now know each other better, and there have been plenty of people going out their way to offer help to others to cope in difficult times. And we have had that to the accompaniment of bird song, as road traffic decreased and we could better appreciate nature around us.

In some ways we have become a better-connected congregation, with a closer engagement with technology. Unable to gather in this building, we have had to work at maintaining fellowship, including with those who were already unable to come to the church building anyway. Technology has been God’s gift to us, including beginning new practices that previously we would have debated for months or years, before deciding to leave things as they were. Now, we have a better handle on ways of communicating, ways that people we want to reach regard as the norm. New possibilities open up.

We have been given a rest from a lot of church-related activities and practices that take up lots of energy in a congregation that is significantly smaller than it was ten years ago. This enforced sabbatical has provided opportunities to consider what we were doing and ask whether and how we want to do things in the future.

Deciding what to keep from before the pandemic, and deciding what to embrace from recent months, as a society, as a church, and as individuals, is the subject for deep thoughts and significant conversations. Joseph’s story reminds us that in understanding what’s gone before and planning for what’s come, looking for what God is doing, is our best guide for interpretation and decision making, today, and in the days ahead.