A sermon preached by the Reverend Trevor Jamison at Penicuik North, Church of Scotland, Pentecost 2014. The occasion included presenting an Eco-Congregation award to the church. There was also the appearance of the Eco Congregation wooden baton, which passed from congregation to congregation, to encourage discussion and prayer ahead of the COP 21 inter-governmental climate change conference in Paris in December that year.

In the sermon the preacher wonders if the Holy Spirit will be able to get so many nations to agree on something, and, as it turns out, they did! How might this sermon speak into our current situation in 2020?

I’m not much of a linguist. I am happy in English and I have learned my way around a restaurant menu in French. Beyond it is a matter of isolated words, phrases and the hope that anyone I am attempting to communicate with is good at playing charades.

Even people I normally think of as multi-lingual sometimes have unexpected weaknesses. I was queuing in a McDonalds restaurant in France – for the coffee you understand – whilst the Dutch gentleman in front of me gave his food order. Knowing that a worker in a French McDonalds is unlikely to be fluent in Dutch he confidently gave her his order … in English! When she looked at him blankly, he repeated the order for her benefit, again in English, but this time … LOUDLY!

At least there would have no problems with understanding food orders on the Day of Pentecost, when Jesus’ promise to his closest disciples that, ‘you will receive power when the Holy Spirit has come upon you’ (Acts 1: 8) was spectacularly fulfilled: a rush of violent wind, the appearance of fire resting upon each one of them, and this moment when ‘they all began to speak in other languages, as the Holy Spirit gave them ability.’ (2: 4) God’s Spirit obviously made a bigger impact upon them in an instant than the best efforts of high school French teachers made upon me over the course of five years.

What these Spirit-filled disciples was no gibberish (Double-Dutch you might say). Diaspora Jews – those living outside Palestine – had gathered together for the Pentecost festival. There were Parthians, Medes, Elamites and others from countries of the ancient Mediterranean world, places so exotically named that you are glad you were not the one on Bible-reading duty this morning. And they said, ‘in our own languages we hear them speaking about God’s deeds of power.’ (2: 11)

Even though the great city of Jerusalem was used to visitors, as a site of religious pilgrimage, in a land criss-crossed by trade routes, this must have been an initially disruptive experience for those who were there. The arrival of the Holy Spirit, who in today’s Gospel reading Jesus refers to as an ‘Advocate’ and a ‘Spirit of Truth’ (15: 26) certainly shakes things up. I wonder if another international meeting in another capital city would benefit from a similar experience. The gathering I have in mind is the one in Paris at the end of this year; COP 21, the twenty-first Conference of the Parties, seeking to agree the measures necessary to avoid damaging changes to the planet and its inhabitants, resulting from humanly-caused climate change.

I’m just suggesting, not making a guarantee. After all, the reason that this conference is called COP21 is that there have been twenty previous conferences which have failed to make the necessary agreements that will protect this planet and its inhabitants from the impacts of climate change. Yet don’t lose hope for, as today’s scripture readings remind us, God’s Holy Spirit inspires world-sized vision; this Holy Spirit demands world-appropriate truth; and this Spirit directs us, Jesus’ disciples, as we deliver a practical, world-protecting testimony.

Back then, when folk from all those different countries asked ‘what does this mean’ it fell to Saint Peter to stand up and present them with an explanation. His explanation is couched not in terms of how God is at work in the Church through the Spirit (though God is), but how God is at work in the world. Drawing upon the OT prophet, Joel, Peter paints a picture of humankind enlivened by the pouring out of God’s Spirit ‘ on all flesh’ (2: 17). Parents and children, male and female, young and old, slave and free – everyone on earth – they are all empowered by God’s Spirit.

If that seems wide ranging, then hold on to your hats, because Joel and Peter’s picture also includes the Spirit at work upon the rest of creation; heaven above and earth beneath, the sun and the moon, the light and the day. Our experience, our vision of the Holy Spirit at work on Pentecost and every other day of the year cannot, must not, be narrowed down to ourselves and the Church. This biblical vision is a vision for a world, and world conferences need to take note.

What a conference of parties, of one hundred and ninety six nations needs to note is the truth, for as John’s Gospel reminds us, Jesus declares that the Holy Spirit is the Spirit of Truth: ‘When the Advocate comes whom I will send to you from the Father, the Spirit of truth, he will testify on my behalf.’ (15: 26) And here’s my understanding of the truth. There will be a lot of different languages being spoken in Paris at the end of this year; perhaps even more than were heard in Jerusalem on Pentecost day, all those years ago. And it’s not just a question of languages. As well as different languages there will also be different religions, cultures and histories represented. It will be a diverse gathering, but a greater truth lies in what is shared, even in the midst of all this diversity.

From a Christian perspective there is in fact only one humankind; created by, loved by, given dignity by the one God who has created us and loves us. And, lest we get too big for our boots, we should remember that we are only one species in one God-created landscape, on one planet, existing in a vast, vast universe, created, sustained and loved by the God has made it. Take that truth on board, then much of competition between peoples on the basis of perceived self-interest gets put into its proper place. When people meeting in conference recognise that this is God’s planet; that we and they, together, are part of a people that inhabits it along with others, then agreement – consensus – on the measures required to protect the planet becomes a possibility, a need and a desire.

And the Holy Spirit, which inspires a world-sized vision, and which operates on the basis of truth, directs followers of Jesus in delivering a practical, world-protecting testimony. In John’s Gospel, Jesus tells his disciples that the Spirit which comes when he departs is an Advocate and a Spirit of Truth. He then goes on to talk about ‘testimony’: ‘He [the Spirit] will testify on my behalf. You also are to testify because you have been with me from the beginning.’ (15: 26b, 27) On Pentecost day that’s exactly what Peter is doing. With people seeking explanations of strange happenings it falls to Peter to testify; not just to speak in Church – even Church ministers can do that – but to stand up in a public place and address the issue of the day out of his knowledge of God as experienced through being with Jesus.

Don’t let me stop anyone here who wants to follow Peter’s example and address a crowd in a public place in Penicuik or Paris with a sermon based on a passage from one of the less well known OT prophets. What was appropriate for a Jewish audience in the first century, however, might not be so effective with a national or international one in the twenty-first. We need to find actions and words that work for here and now, which give an effective Spirit-inspired testimony for our own time. Although it might not seem so spectacular, the good news is that we are already doing so in a number of ways.

Passing a wooden baton sends a message. The words, literally burned into it, read, “Time for Climate Justice: Churches in Scotland demand a deal in Paris, December 2015.” It’s not just words that are shared but also the action of passing it from person to person and church to church; shared in a very twenty-first century way of pictures on websites and social media such as Facebook and Twitter. Registering as an Eco Congregation is another form of testimony, as is the work done which leads to the receiving an Eco Congregation award. And think of the potential testimony about God’s creation that might come through a church-run community outreach event based around environmental concerns.

So, on this Pentecost Sunday let’s seek a Spirit-inspired vision for God’s world. Inspired by that same Spirit of Truth let’s seek to know the truth about the world and our shared place within it. And may that same Spirit of Truth, that Advocate, inspire, encourage and cajole us to share our testimony with the world, in our words and our action. All this for the sake of God’s creation and to give God the glory. Amen. 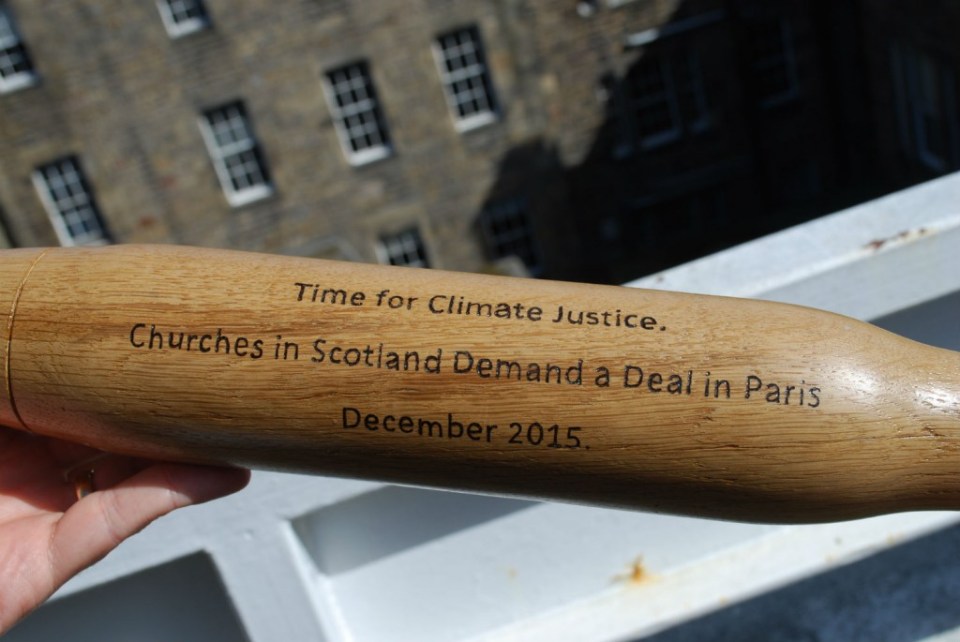 Sermon: The Man with the Plank

Anything you Want to be?