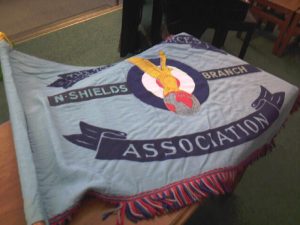 St Columba’s saw a colourful service on the morning of Sunday 27 January, when the Royal Air Forces Association (North Shields Branch) laid up it standard.

The flag and supporting standards, accompanied by the Union Flag, were paraded smartly into church by young and immaculately uniformed cadets. During the service, two cadets gave Bible readings, and the Branch Chairman and two colleagues also took part, giving the history of the RAF Association, a poem, and a story , and taking part in an act of remembrance for members of the RAF killed in active service, during which a young cadet sounded her bugle. The Branch Chairman handed over the Branch standard, which was then laid upon a communion table, to be kept in the war memorial corner along with the flag of the North Shields & Whitley Bay Branch of the Royal British Legion.

The Royal Air Forces Association offers friendship, help and support to members and veterans of the RAF and their families. It came into being in 1930, bringing together a number of smaller organisations that had been concerned with the welfare of First World War pilots and staff. It has held royal patronage since 1937. During the Second World War, women joined in the war effort, and the association united with equivalent women’s organisations, was restructuring, and took its current name. From its London office, branches were set up in the regions and throughout the world. Now, in the twenty-first century, the association is adapting to current needs, and has reorganised itself and moved its central office to Leicester. The RAF Association continues to do valuable work, through 445 branches serving over 65,000 members, providing support, welfare, legal and careers advice, and alleviating suffering within the RAF family.