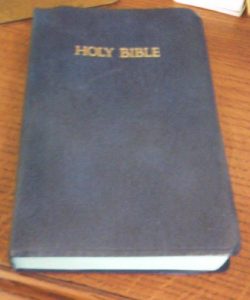 The year 2011 marks the 400th anniversary of the King James Bible.

During the course of the morning service of worship, the congregation heard something of the story of the King James Bible.  After King James VI of Scotland became King James I of England in 1603, he approved a proposal for a new translation of the Bible into English, by about 50 scholars.  It was published in 1611, and quickly supplanted earlier versions to become the most authoritative English language Bible.  The impact of the King James Bible on English national culture is immense.  Apart from the Lord’s Prayer (Matthew 6: 9-13), which is repeated by Christians on a regular basis, many of our favourite phrases and proverbs derive from the text of this Bible…

Since the late 19th century, there has been a growing tidal wave of new translations and revisions, including the Revised English Bible, the New International Version, the Good News Bible, the New Revised Standard Version, the New Jerusalem Bible, the Message, and the Street Bible.  Each one has sought to improve on the translation, and provide a more accessible text in a modern culture.  Some follow the original Hebrew, Aramaic and Greek sources fairly closely, whilst others prefer to use more idiomatic English style – there is even a Geordie Bible!

Nowadays, St Columba’s mainly uses the New International Version, published in 1984.  However, the power and beauty of the words of the 400-year-old King James Bible continue to charm, captivate and inspire, even in the 21st century.