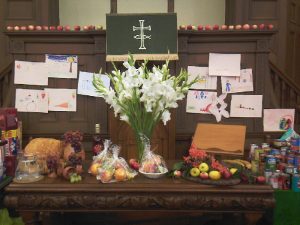 It was back to church for Harvest Festival on Sunday 26 September.  St Columba’s Church was packed with about two hundred members and visitors for the all-age celebration service.  The children of the 1st North Shields Brownies and Rainbows and the 4th Tynemouth (Congers) Beavers, Cubs and Scouts paraded their colours as they joined the service and presented their flags.

We began and ended with favourite traditional harvest hymns, Come, ye Thankful People, Come and We Plough the Fields, and Scatter the Good Seed on the Land.  The children enjoyed performing actions to My God is so Big, so Strong and so Mighty and If I were a Butterfly.

Tables were filled with produce from all over the world – both fresh and packaged.  These were later donated to Newcastle homeless charity The People’s Kitchen.  A video and a dramatic sketch helped us to appreciate the huge variety of foods available in God’s world.  Even though few of us nowadays have firsthand experience of farming and harvesting crops, we all benefit from it.  Four of the children then took part in a taste test, trying to guess what fruits they were eating without having seen them.  Our Minister, Revd Liz Blair, encouraged us all to try something new, and to appreciate the bounty of God’s creation.

Mathew read from the Biblical book of Deuteronomy (chapter 26), about the early Jewish traditions of giving thanks to God for the first fruits of the harvest, and sharing with people in need.  Liz used a bucket to illustrate the portrayal of heaven given in the Biblical book of Revelation (chapter 21).  In heaven, she explained, there would be no more tears or illness, so hankies and medicines could be thrown into the bucket.  Spectacles and hymn books could also be thrown in, as we would all be able to see God face to face, and sing songs of praise from our hearts.  Until that time, she called us to work together to put right the many ways in which the world is unfair.  In the words of the modern hymn I, the Lord of Sea and Sky, she challenged us to hold all God’s people in our hearts.  Some of the children had drawn pictures of harvest, or had made paper windmills of change, which were displayed round the church.  Children also took part in leading prayers for the world. 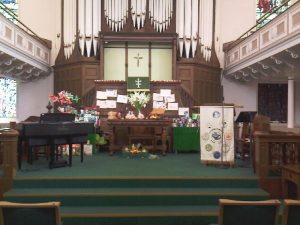 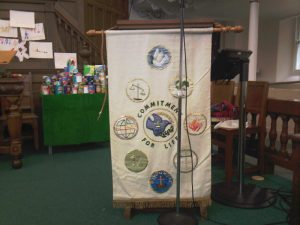 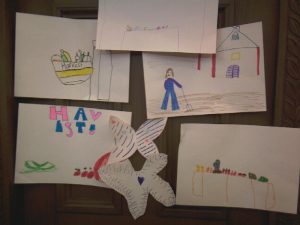 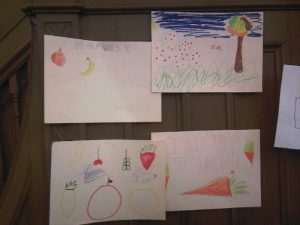 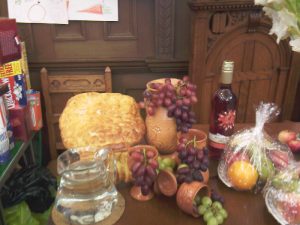 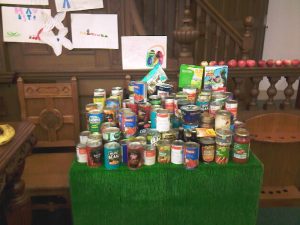 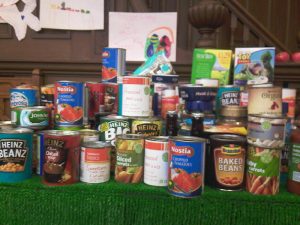 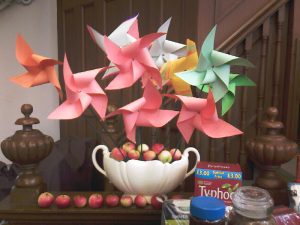 How lovely it is to have such a swift report of the Harvest festival at St Columbas, with such beautiful photos to illustrate the piece. It was a tremendous privilege to worship with so many others at St Columbas on Sunday, to see the Church packed with folk was a real treat!