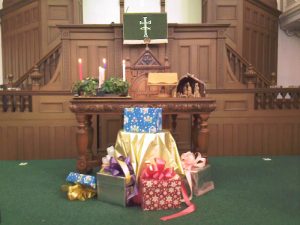 Worshippers were not put off by snow at our Christmas services in 2010.  Despite several weeks of snow and ice, St Columba’s Church was fairly full for the traditional carols by candlelight on Christmas Eve.  During the penultimate carol, Silent Night, the electric lights were dimmed, and Christingle candles lit for a memorable start to Christmas.  Young and old, long-standing and new members took part in the service, giving readings and making music.  Mince pies were served in the hall afterwards, as worshippers caught up with friends, including those visiting for the festive season.  A charitable collection raised £200 each for two local charities, Ladies in Pink Scarves (a breast cancer charity) and Tynesight.

A smaller congregation gathered on Christmas morning to celebrate the birth of Jesus.  At the Nativity service a week earlier, performed by the young people, a real baby was present, as one of our members had given birth to a son just eight days earlier.