St Columba’s was delighted to receive the Child-Friendly Church Award at a meeting of the Northern Synod of the United Reformed Church on 15 October 2011.  The plaque and certificate were presented by the Synod Moderator, Revd Rowena Francis.  They were then displayed at church the following day, during an all-age and baptism service, which very much focussed on children and growing up in the faith.

The award was made following inspection of St Columba’s premises and activities for children, which include a children’s play area with colouring books and toys, pictures on the walls, and a junior version of the weekly Sunday Link news sheet, called Look.  In addition to Junior Church each Sunday morning, St Columba’s also offers a parent & toddler group, youth club, rainbows, brownies, beavers, cubs and scouts. 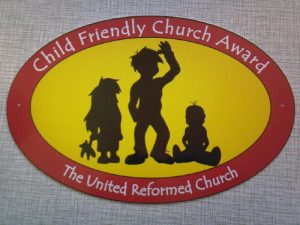