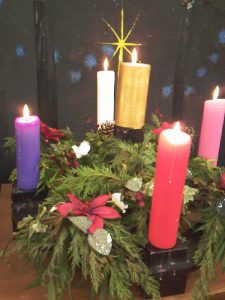 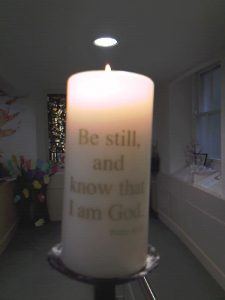 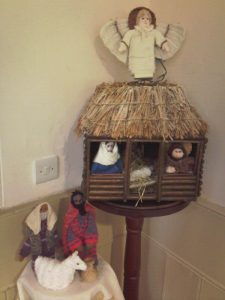 A smaller congregation gathered at St Columba’s on Christmas morning to light the fifth candle in our Advent wreath, and celebrate the birth of our Saviour, Jesus Christ.  We sang some Christmas Day carols, showed some presents, played pass the parcel, and remembered in prayer those for whom Christmas may be a difficult time.  Our message this morning was that “Christmas is spoken here.” 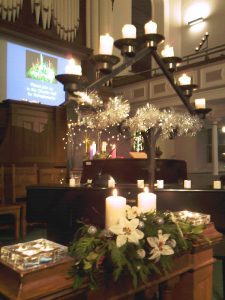 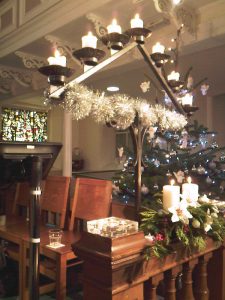 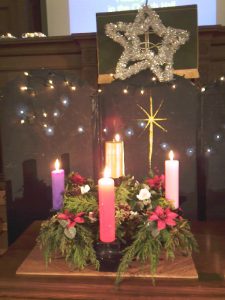 On Christmas Eve, the candlelit church was packed, with a good number in the gallery.  We enjoyed a service of Christmas carols, readings, prayers and reflections, with many of our young people and some our seniors taking part.  A collection was taken for a local charity, the East End Youth & Community Centre.  It was good to see members and Christmas visitors catching up in the happy hubbub of voices, mince pies and mulled wine in the hall afterwards. 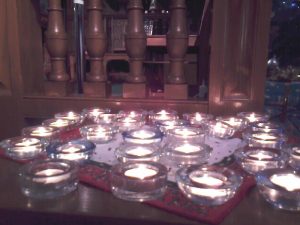 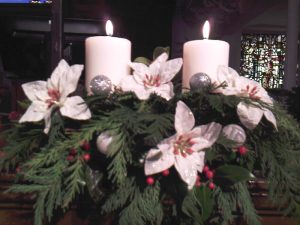 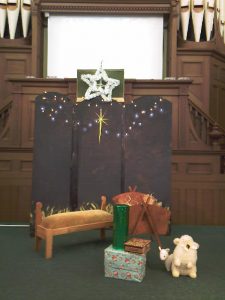 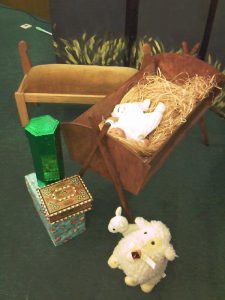 Children from Junior Church and Messy Church came together to present a nativity play on the morning of Sunday 17 December, dressed as Mary and Joseph, angels, shepherds and kings from the Gospel stories.  They performed very well, with a prayerful Mary and a bashful shepherd.

We were reminded that the very first Christmas was a big surprise – our creator God coming to earth as a vulnerable baby to save us all and restore our relationships with him and each other.  We were asked to ponder whether we reject, neglect or accept this gift and enjoy all that it brings. 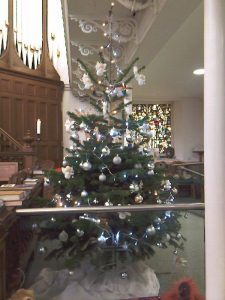 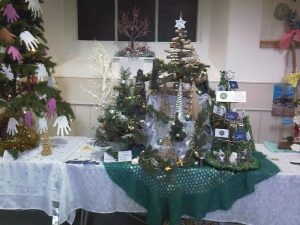 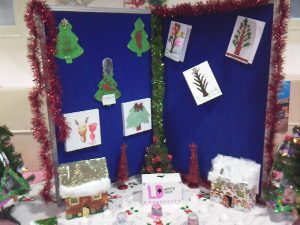 There was a great deal of creativity on display the weekend of 9-10 December.

St Columba’s put on a festival of Christmas trees, whilst the regular Victorian Christmas market was in full swing outside in Northumberland Square.

Nearly twenty groups connected with the church, including other local churches and organisations, had designed displays.  There was a great variety to be admired.  The Brownies had made very effective trees out of folded paper, LD North East and the Thursday Guild had photos of some of their faces hanging from their trees, Café 2.21 and Early Bird Breakfast had made decorations that looked like tea cups and fried eggs, and of course HANDS had to decorate their trees with hands!  There was a vintage tree with memories of the 1950s, and an appearance from Paddington Bear with his jars of marmalade.  Even the cleaners had contributed a wooden broom decorated with dusters!  A tree of memories gave an opportunity to remember those no longer with us.  There had been a lot of colouring in, cutting out, making and decorating.

Next door in the church hall, creativity of a different sort was in evidence.  On a cold weekend, with a brief dusting of snow on the Sunday afternoon, the soup proved very popular, along with an appetising selection of home-baked scones and tray bakes.

Many thanks are due for a good deal of hard work on a very successful weekend, raising £750 each for local cancer charity Daft as a Brush and for church funds. 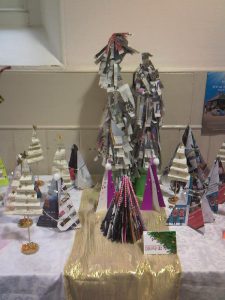 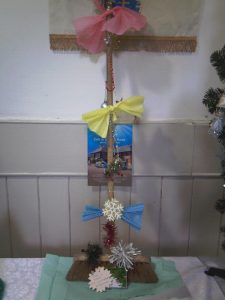 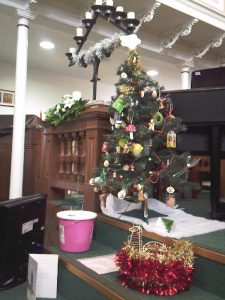 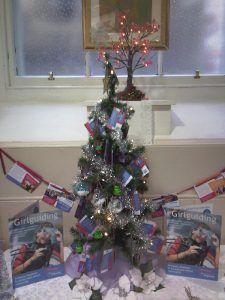 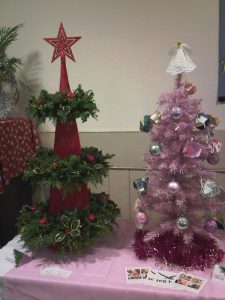 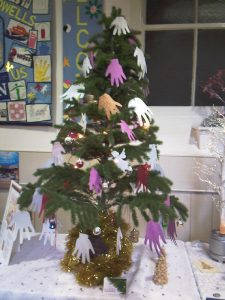 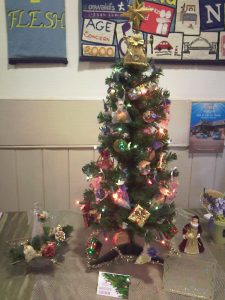 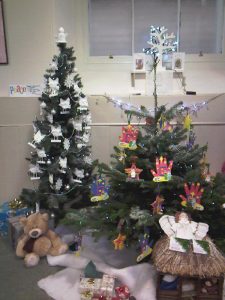 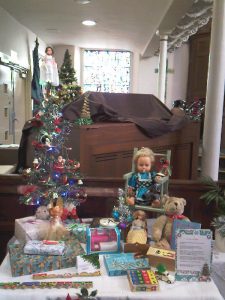 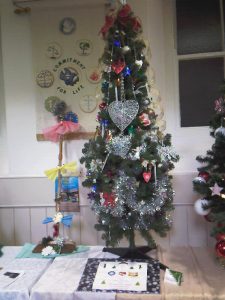 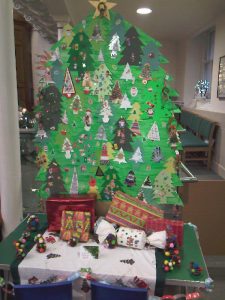 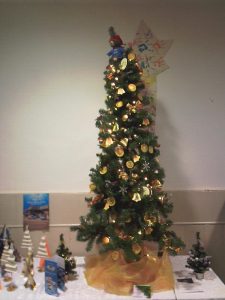 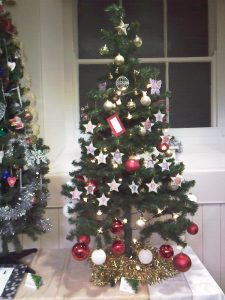 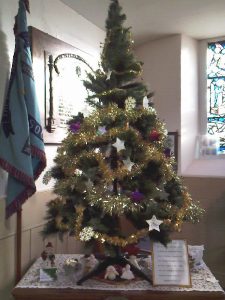 For many years, the church has supported Samaritan’s Purse’s Operation Christmas Child project.  People from all over the area have been coming to drop off shoeboxes at the church, and many were added in today’s service.  A couple of hundred boxes were piled up at the front of the church and blessed before heading out on a journey around the world.

Each shoebox is filled with gifts such as toys, games, balls, paper and pens, hats, scarves, gloves, soap, toothpaste and brush, given with love, to be transported to a church in a poor country, for a child who otherwise might not get any Christmas presents.  There is also an option for the child to learn about Jesus and the Christmas story.

In today’s service, we reminisced on Christmases past, particularly those in the era of post-war rationing, when parents had little to give to their children in this country. 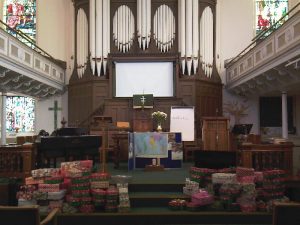 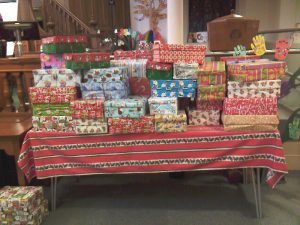